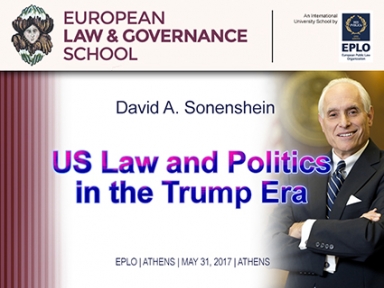 A lecture on the impact of the election of Donald Trump both inside the U.S. -in politics and justice- and on a global level was given by the Emeritus Professor at Temple University, Beasley School of Law David A. Sonenshein on Wednesday May 31, 2017 at the EPLO premises in Plaka, Athens.

The lecture titled: “US Law and Politics in the Trump Era” was organized by the “European Law and Governance School” (ELGS), an International University School  operated by the European Public Law Organization (EPLO).

Prof. Andreas Pottakis, Provost of Postgraduate Studies of the ELGS and Ombudsman of Greece, welcomed and introduced David A. Sonenshein highlighting the fact that he has received the “Outstanding Professor Award” at both DePaul and Temple Law Schools a total of six times. The speaker is currently a member of the International Faculty of the ELGS.