PRESSING PROBLEMS IN INTERNATIONAL LAW: Courts and Sources of Law

The Conference on ‘Opinion 1/17: European and International Perspectives’, that took place in Paris on 12 and 13 June 2019, was organised by the European Law and Governance School/EPLO (Athens), the University of Oslo, Faculty of Law, the Hague University of Applied Sciences, and the Centre Universitaire de Norvège à Paris.

After an introduction on the relationship between the EU and international investment disputes, the speakers examined the judicial independence and impartiality of judiciary, EU autonomy as well as the right to regulate and equal treatment. It was outlined that, whereas the Opinion strengthens the role of the EU as an international actor, the analysis of the ECJ is partially inconsistent with its previous case-law and opens the debate up for further questions.

Opinion 1/17 is destined to become a landmark in the case law of the ECJ. The Court, having decided that the ICS is compatible with EU law, reinvigorated the future of investment arbitration in the EU and at the international level (in the light of the proposed Multilateral Investment Court).

The ECJ has been called upon to interpret and further clarify the meaning and scope of foundational principles such as the autonomy of the EU legal order vis-à-vis international investment arbitration, the principle of non-discrimination and the right of access to an independent and impartial tribunal.

The aim of this timely Conference is to analyse comprehensively the Court’s decision and its broader implications. It will bring together experts with different background that will discuss the issues at stake from both European and international perspectives.

Opinion 1/17 in Perspective: The Future of Investor-State Dispute Settlement and Multilateral Investment Court

Unshackling the Economic Giant? The EU as an International Economic Actor After Opinion 1/17

Revisiting Independence and Impartiality in the Investment Court System

Autonomy of EU legal order and its normative implications

The Accession of the EU to the ECHR after Opinion 1/17: Rethinking Autonomy

Equal treatment in Opinion 1/17. Did the Court choose the right situation to compare?

Workshop on Auto-interpretation in International Law

Organised under the auspices of the University of Oslo – Faculty of Law,

Auto-interpretation and the Use of Force in International Law

Mads Andenas has published extensively on international and also commercial and financial law. He holds a Chair at the Faculty of Law at the University of Oslo.  He is a Member of the Panel of Arbitrators maintained by the International Centre for Settlement of Investment Disputes (ICSID), appointed until 2022.  He was thePrésident-rapporteur of the UN Working Group on Arbitrary Detention (which hears individual cases and issues ‘opinions’) 2009-2015. Professor Andenas was made a Queen’s Counsel in 2019. From the Lord Chancellor’s recommendation to the Queen: “Professor Andenas is considered a stellar academic and has been recommended for his work in the fields of comparative and international law, in familiarising academic and practising lawyers and the judiciary in this jurisdiction with other systems of law and by encouraging exchanges of views and approaches between common and civil lawyers. He has written many books on the subject. He has established a series of annual seminars on pressing issues as seen from European Supreme Courts. This was inaugurated by a seminar in the UK Supreme Court with the participation of a number of leading UK practitioners and judges. He was also member and Special Rapporteur in the UN Working Group on Arbitrary Detention, and contributed to its report  ‘Basic Principles and Guidelines’ (2012). This report has been referred to in UK Supreme Court judgments.”

Maria Fanou is a qualified lawyer (Athens Bar, Court of Appeal) and a PhD Researcher at the European University Institute in Florence. She completed a Bachelor’s Degree in Law at the University of Athens and an LL.M. at Harvard Law School. Prior to joining the EUI, Maria gained practical experience in private practice. Maria also has held visiting research positions at various institutions including the Max Planck Institute for Procedural Law in Luxembourg where she was a Visiting Scholar (Scholarship 2018). Currently, she is a doctoral affiliate at Queen Mary University and a Visiting Lecturer at the Brussels School of International Studies, University of Kent.

Catharine Titi is a Research Associate Professor (tenured) at the French National Centre for Scientific Research (CNRS)–CERSA, University Paris II Panthéon-Assas, France. She is Co-Chair of the ESIL Interest Group on International Economic Law, Member of the Steering Committee of the Academic Forum on ISDS, Member of the International Law Association (ILA) Committee on Rule of Law and International Investment Law and she serves on the Editorial Board of the Yearbook on International Investment Law & Policy (Columbia/OUP). She co-directs the research project The impact of international investment agreements on FDI flows funded by the French Ministry of Justice (2017-2019). Catharine holds a PhD from the University of Siegen in Germany (Summa cum laude) and has previously been a consultant at the United Nations Conference on Trade and Development (UNCTAD). In 2016, Catharine became the first woman to be awarded the prestigious Smit-Lowenfeld Prize of the International Arbitration Club of New York for the best article published in the field of international arbitration.

Hendrik Puschmann is a Partner of Farrer & Co, where he heads the arbitration practice group. He is a Fellow Commoner of Clare Hall, Cambridge, Visiting Senior Lecturer in international law and commerce at Johannes Kepler Universität Linz (Austria) and member of the Contractual ICSID Arbitration Working Group at the Institute of Advanced Legal Studies as well as the Academic Advisory Board of the Institute of Applied Commercial Law at Nordakademie Hamburg. His book on challenges against arbitrators, awards and enforcement is due to be published by Butterworths next month.

Giorgia Sangiuolo is the Academic Coordinator of the Jean Monnet Project “LAwTTIP: Legal Ambiguities Withstanding the TTIP” for the Centre of European Law at King’s College London and a Ph.D. researcher at the same institution. Her research focuses on the external relations of the EU and their interface with other dispute settlement mechanisms, particularly international arbitration. Giorgia is also a member of the Drafting Team of the Hague Rules on Business and Human Rights, a project funded by the City of The Hague and endorsed by the Dutch Ministry for Foreign Affairs.

Luca Pantaleo is a Senior Lecturer in International and European Law at The Hague University of Applied Sciences since August 2016, as well as Adjunct Professor of the European Law and Governance School since autumn 2018. He holds a PhD in EU external relations law from the University of Macerata, Italy. His PhD thesis focused on Member States’ International Agreements and EU Law. Prior to The Hague University, Luca has worked as a Senior Researcher (Postdoc) at the University of Luxembourg, and as a Senior Researcher at the T.M.C. Asser Institute, where he also served as Coordinator of the Centre for the Law of European External Relations (CLEER). Dr Pantaleo research interests include the law of EU external relations, with a special focus on anti-terrorism and the common commercial policy; as well as public international law, with a special focus on trade and investment law. Dr Pantaleo has written numerous article in international peer reviewed journals, edited a number of volumes and has recently published a monograph titled “The Participation of the EU in International Dispute Settlement – Lessons from EU Investment Agreements”. His research activities are not limited to fundamental research. In fact, he has also carried out applied research in the context of projects commissioned by third parties. Dr Pantaleo is also an experienced legal trainer.

Antonis Metaxas teaches EU law in the University of Athens as well as acts as visiting Professor in various distinguished universities in Greece and abroad (TU Berlin). He is regarded as leading practitioner and academic in Europe in his field by all independent international Legal Directories (Chambers, Legal 500) and acts as senior legal advisor to a number of governments, regulatory authorities as well as major private and institutional clients. He is author of numerous scientific publications in the fields of EU, EU state aid and Energy law. Professor Dr. A. Metaxas is Managing Partner of the law firm Metaxas & Associates (M&A). Prof. Metaxas is Chairman of the Board of the Hellenic State Aid Institute (HSAI, www.stateaid.gr) and of the Hellenic Energy Regulation Institute (HERI – www.energy-regulation.eu).

Panel 4 – OPINION 1/17 AND THE RIGHT TO EQUAL TREATMENT

Cristina Contartese (MA University of Birmingham; PhD University of Bologna-University of Strasbourg) is Lecturer in EU Law at the European Law and Governance School/European Public Law Organization (Athens). Previously, she held positions as a Post-doc researcher at the University of Bologna, where she taught International Law, and at the University of Luxembourg (Marie Curie fellow/FNR-Luxembourg), where she researched on dispute settlement from EU and International Law perspectives. She was a visiting researcher at the Max Planck Institute–Luxembourg, and at the iCourts Centre (University of Copenhagen). Her main research interests include: EU Constitutional Law, EU External Relations, International Dispute Settlement, International Water Law, and the European Convention on Human Rights. She published on these subjects in edited books and peer-reviewed journals, such as Common Market Law Review and Rivista di Diritto Internazionale. She is a member of the editorial board of International Journal of Human Rights and Constitutional Studies (IJHRCS).

Szilárd Gáspár Szilágyi recently completed his Postdoctoral Fellowship at PluriCourts, University of Oslo. He holds a PhD from Aarhus University (Denmark, 2015) and a two-year LLM in International Law from Maastricht University (Netherlands, 2011, top 3% of students). He has previously been a Postdoctoral researcher at the University of Amsterdam (Centre for EU Law and Governance, 2015-2016), and an EU Law Lecturer at the Hague University of Applied Sciences (2015). He has also been a visiting researcher at Vienna University (2017), TMC Asser Institute (The Hague, 2014), a Grotius Visiting Researcher at University of Michigan Law School (2013-2014), and an intern at the EU Commission (2011-2012).  He regularly publishes on issues concerning the EU’s Investment Law and Policy, International Investment Law, EU External Relations Law and the EU’s Common Commercial Policy.”

Tarjei Bekkedal is Professor in European Law at the University of Oslo. He is also the President of the Norwegian Association for European Law.

François Andia is a doctoral student in Public International Law. He is writing a thesis on the consensual jurisdiction of international courts in collaboration under the direction of Jean-Marc Thouvenin and with the support of Sygna Partners, a law firm in Paris, and the Centre de droit international de Nanterre of Paris Nanterre University. 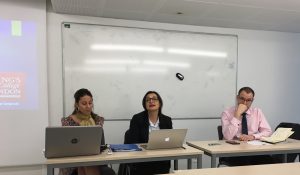 ELGS Lecture of J.F. Gaudreault-DesBiens in honor of Prof. G.Amato