Prof. Jean-François Gaudreault-Desbiens Lecturing on "Legal and cultural diversity in Canada: some observations”

The European Law and Governance School (ELGS) of the European Public Law Organization (EPLO) organized the 2nd Lecture in honor of its Honorary President; Professor Giuliano Amato, Constitutional Judge and Former Prime Minister of Italy with guest speaker Jean-François Gaudreault-DesBiens, professor at the University of Montreal on “Legal and Cultural Diversity in the Canada: Relevant Comments “.

As the Director of the Organization Professor Spyridon Fologitis said in spite of the adverse weather conditions of 40 degrees and the warm political barometer determined by the pre-election period, we are very grateful to the politicians and Mr. Katrougalos especially who  honor us with their presence at this anniversary event. This event marks 12 years since the historic day of ratification of the treaty of 21 June with which EPLO entered into force its establishment as an International Organization, and that is why we are grateful to three states: the Hellenic Republic, the Republic of Italy and the Republic of Cyprus, who contributed to its foundation. “Mr. Flogaitis stressed that this is a series of lectures in honor of Professor Giuliano Amato, current member of the Constitutional Court of Italy,  former Prime Minister of Italy, who in addition to the important role he has in the EPLO, he is the initiator and visionary of the European Law & Governance School.The mission of the ELGS International University School is not the creation of national lawyers but the education of European citizens in European law and European Governance, especially at the undergraduate level. The School has established collaboration with major universities around the world who can undertake the further education of students into national law and other sciences.

Professor Gaudreault-DesBiens stressed that Canada, apart from the fact that it has made a significant contribution to the endeavors of comparative law, should be “open up” to the world, to Europe, to the rest of North America, and this mission serves his presence here.

His presentation focused on how Canada addresses the legal implications of cultural diversity, the protection of minorities through the perspective of a constitutional lawyer.

Giuliano Amato intervened via skype, mentioning among others that there are a number of countries facing such difficulties while he highlighted the case of Bosnia Erzegovina “where three communities” -as he mentioned- “that were supposed to find a common agreement in federation, are still more and more separate from each other. Certainly federalism is a solution as federalism implies a certain platform of uniformity but also wide room for the recognition of diversities which, when you have religious differences, is extremely important for the community as eventual issues rise from divorce to abortion to same sex marriages that has now entered the arena.” And added that “what is worrying, is the pressure we are facing on the one side for the recognition of diversities in Europe but at the same time, mostly at the judiciary level, the obvious pressure of uniformity on the recognition of human rights. This is our problem nowadays”. 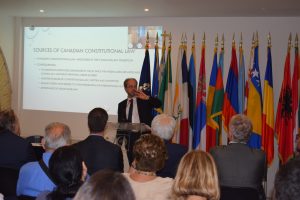 Conference on Opinion 1/17 in Paris