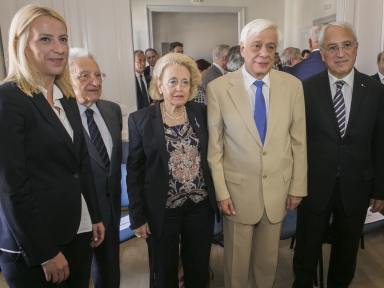 The EPLO had the honor of inaugurating its new building in Plaka (the old district in the center of Athens) on the 10th of September.HE the Serb Member of the Presidency of Bosnia and Herzegovina Mr. M. Ivanic, The President of the Hellenic Republic Prof. Prokopis Pavlopoulos,the former Italian Prime Minister Prof. Giuliano Amato, Prime Minister of the Hellenic Republic ms V. Thanou, the Greek Minister for Foreign Affairs Mr Petros Molyviatis, the Alternate Foreign Minister Prof. Spyros Flogaitis, the Minister of Justice of the Republic of Albania Mr. N. Naco and the Secretary General of the Ministry of Justice of the Republic of Albania, and Ms. L. Misto, the Minister of Justice of Hungary, Mr. L. Trócsányi , the Deputy Minister of Justice of Azerbaijan mr Musayev, the Attorney General of the Republic of Cyprus mr C. Clerides, the Judge of the Constitutional Court of Romania, Prof. S.M. Teodoroiu, the Negotiator of the Greek-Cypriot Community, Former Deputy Minister to the President of the Republic of Cyprus for the European Affairs, Mr. A Mavroyiannis, the former Deputy Minister of Ecology and Natural Resources of Ukraine, mr D. Mormul, the Acting Director of DG Environment of the European Commission, Mr. G. Kremlis, the Prefect of Attica, ms Rena Dourou and other distinguished personalities from the political and academic world, attended the new building inauguration. The neoclassical building in Polygnotou street was handed over to Prof. Giuliano Amato, by the Prefect of Attica Ms Rena Dourou, as the Attica Region undertook the restoration of the building.
Ms.R. Dourou underlined the importance of the fact that the building that will house the European Public Law Organization is located in the historic center of Athens and highlighted the EPLO’s contribution to the creation and dissemination of knowldge in the area of public law.
Former Italian Prime Minister Prof. Giuliano Amato underlined the importance of the Organization based in Athens, and wished that it further develops into a cultural and educational center, not only for Europe but also for the world especially during the current difficult circumstances.

In his speech, the President of the Hellenic Republic Prof. Prokopis Pavlopoulos besides stressing the importance of the EPLO’s new location, close to the remains of ancient Athens, has for Greece, he added: “We are not only heirs of a great past, we can and must succeed in, guaranteing a better future, not only for our country, but for Europe itself. Europe, that has always been the cradle of democracy and has taught us through the years how many significant things can be achieved by mankind through Democracy and Peace. These relics remind us of how the everlasting Ancient Athens behaved in similar cases.”

Also the President noted that “the institution of a Refugee is similar to that of the Supplicant during the Ancient Greek Republic. The Supplicant had the same treatment as described today in the European Pact on Immigration and Asylum, which should be the basis of our immigration and refugee policy in general. ”

President Pavlopoulos continued that we must not forget that the centuries pass but the Man still faces the same challenges and added:”We need Europe to show that the first and foremost value is the Man and his dignity, and the economic growth will only have fulfilled its purpose, when it is able to secure a man’s course under the democratic conditions that ancient Greece and Europe have inspired and are still inspiring today. ”

Referring to the European Public Law Organization, President P. Pavlopoulos said that “the Greek state fulfills today its “debt” against an institution that honors Greece, and this should be realized by everyone, since the existence of this Organization’s building here is an enormous opportunity given to our country to show what it can offer, in general, to Europe and the world.”